Every day I take the same trip to work on my bike.  Mind you, it’s not the most enjoyable ride… my apartment lies on the outskirts of Rochester, but my workplace is in Henrietta, New York, a first ring suburb that hosts the furthest thing from a New Urbanistic design as there could possibly be.  Strip malls for miles, connected by 7-lane highways posing as roads. As little as I like to admit it, there are select times when I prefer to ride the sidewalk along this stretch, simply because I’ve had so many close calls on the road.

In doing this, I’ve experienced this stretch from the pedestrian point of view, which in many places is equally as bleak from a safety perspective. One crosswalk in particular is so dangerous I feel it needs to be addressed publicly, and the worst part is, it’s brand new. For the amount of safety data available, not to mention the tens of millions of dollars it took to complete this project, I believe the finished design is a borderline irresponsible creation. 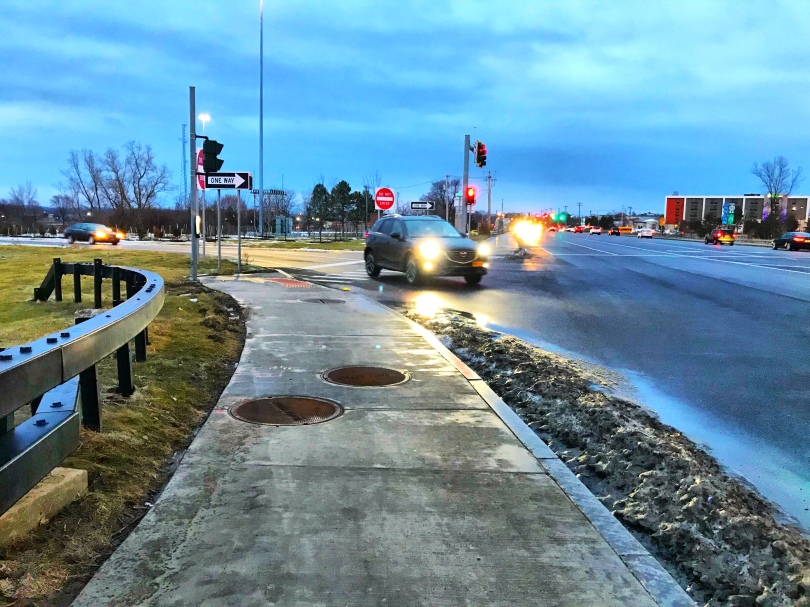 This is the newly designed offramp from I-390 Northbound as it meets East Henrietta Road, a six-lane corridor. Most cars make a right a right turn from this ramp as it is in the direction of the University of Rochester and it’s Medical Center, the city’s largest employer. Note that the ramp curves or “slips” into East Henrietta Road, almost like a merge… but it’s not a merge at all. It is a traffic light controlled intersection and a menace for pedestrians.

Drivers making a right turn from the offramp to East Henrietta Road roll up to the “intersection,” look left and if traffic is clear, continue to roll through their right turn, even if the light is red. The curve of the ramp as it merges into East Henrietta encourages this “drive-through” red light action, enabling drivers to only look left and continue their speed of travel without stopping and watching for pedestrians. While they show the project still under construction (it is now completed) the Google Images below tell the tale perfectly, showing the “slipping” of cars from the ramp to the road.

And then there’s the final “cherry on top” fail that this new traffic pattern employs.

to cross this offramp legally, the pedestrian must press a “beg button.” In cities across the nation, these buttons are being eliminated, as it sends a clear message that, like the orphan child Oliver asking for more porridge, the pedestrian has to push a button to cross while cars simply roll on. Today’s signals automatically give the pedestrian the “walk” sign when the traffic light favors their direction of travel. Not so with this intersection… you must push the button and wait your turn to cross this ramp. Ultimately, whether the walk signal is on or not, drivers rarely look right to see if someone is traversing the intersection anyway, as they roll through red lights, often not even slowing down.

People walk along this corridor for a variety of reasons. It connects several areas and neighborhoods to Monroe Community College, as well as jobs at stores and restaurants in Henrietta. Frequently I ride by people walking wearing a Burger King uniform on their way to work. More frequent is the passing of students on their way to class at MCC.

The intention is obvious… move traffic off the expressway as quickly and seamlessly as possible, getting people to their place of work with ease. But the reality is a missed opportunity to create a people-centered, walkable and bike-friendly environment in an over-congested corridor (bike lanes on this 6-lane road are a joke, frankly) that links two colleges, a medical center a residential neighborhood and several apartment complexes. The result is a tragically dangerous situation with regard to this intersection and others along this route.

Often, we cite these design fails as mistakes from another time, but the fact that this project was completed recently with the incorporation of such a dangerous pedestrian experience is alarming at best. The “rounded” merge of this ramp into East Henrietta and the working “beg button” must be eliminated to create a safer experience for those who rely on pedestrian access along this corridor. 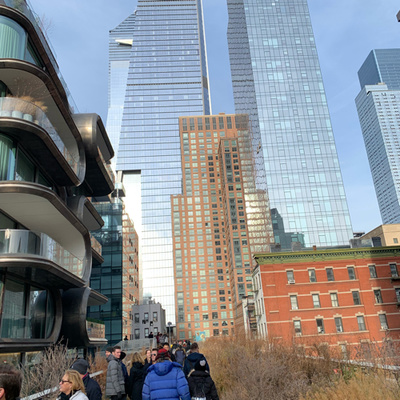 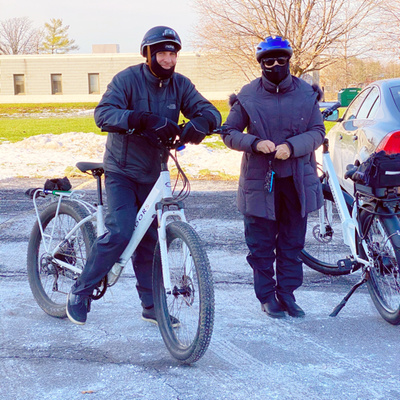 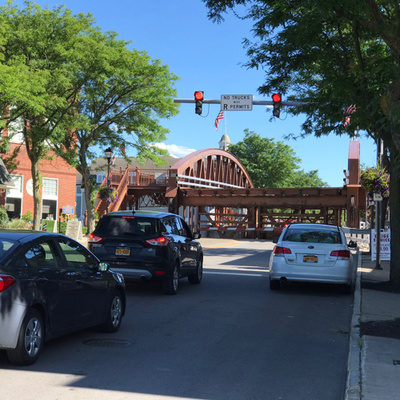