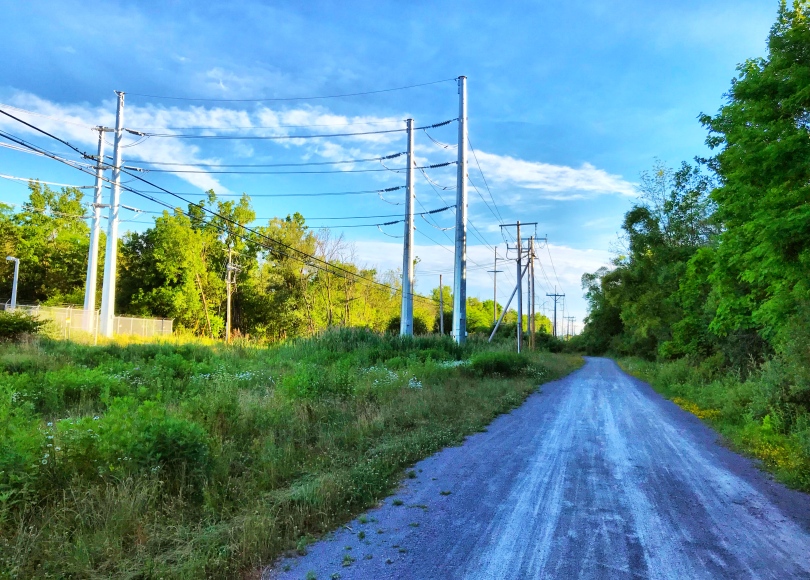 As much as we fight for every mile of bike lane, it can take years for funding to be allocated, or implementation to become a reality.  In the meantime, we are often relegated to main streets that aren’t exactly welcoming venues for bicycles.

But in many cases, a quick look at Google Maps satellite view can turn you on to an alternate route with less traffic and thus, less stress.  Case in point, for years I have been biking to work along a stretch of heavy traffic.  One day while randomly looking at my area from the aforementioned map, I realized that all this time there was a road behind an old abandoned psychiatric center that connected with another road, and eventually a trail that took me around a park to the Erie Canalway Trail.  In essence, I added about a minute on to my commute, but cut out half of the “high stress” travel.

And even better, my view is laced with beautiful nature and the occasional encounters with wildlife.

Sometimes it’s not about finding a whole new route, it’s simply about a cut-through that connects two points and minimizes exposure to traffic. Below is a couple tenths of a mile “trail” that connects the Genesee Riverway Trail at downtown Rochester with the Union Street Cycle Track, the city’s first dedicated bike track.

How about that main artery street that is the straightest line between two points? Often these streets are paralleled by slower and less-frequented side streets. These are always a better option for bike riders.

These are simple tricks that most cyclists know and appreciate. But often, the casual rider is understandably stuck in the notion that they must use the same routes that they would in a car. Helping these folks realize that the best direction for a car does not equal the best route for a bike is key to increasing the ranks of fun-seeking cyclists and bike-commuters in our communities.

The very simple moral of the story is, just because bike lanes might not cover every road you traverse by bike, a quick check on Google Maps, or a short exploration of the surrounding streets can be just the trick to turning a white-knuckle bike commute into an enjoyable, stress-free experience.

If You Lived Here, You’d Be Home By Now